When this photo and its caption appeared in one social media group, gender specialist Leticia Cornelius was quick to comment, challenging what she termed as “African stereotype on women and sex.” Her comments inspired fellow feminists – whose names will be shown in initials here, for the sake of convenience – and they responded with varying degrees of agreement and disagreement. Interested to move the debate to a higher level, SAUTI KUBWA found it worthy publishing – with their permission. Read on: 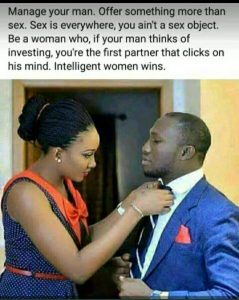 Now regarding this picture and it’s statements, this is what I  think:

For the uninitiated, these statements are powerful and they may even make sense. To me, they are a classic example of harmful stereotyping. They are also quite archaic and may not be fully appropriate for today’s world.

“Manage your man.” This statement is contextual.  It doesn’t reflect the African reality. I am aware that this “managing” is required to be subtle.

However, many African men would find it offensive as they wish to feel that they are always in charge of their women.  Also, in this part of the world, very few men invest in any business in collaboration with their spouses or female partners. They prefer male business partners.

“Intelligent women win”. Trite. Not always true. I know of several examples. Few men are attracted by intelligence. It is not the basis for calculations of the dowry.

In fact, an intelligent woman is sometimes perceived as a liability. As a woman, being intelligent is one thing, which by the way many women are.  Our mothers were not that well educated but they were the neck that turned the head (husbands) in the right direction.

However, it takes an equally intelligent, wise, loyal man who understands his limits as well as what it takes to create a loving and functional partnership.

Luckily, we have a few exemplary men who give women hope. Obama, Gates, my uncle Rugaimukamu, Mufuruki or such, who seem to appreciate and practice the concept of true partnership and the loyalty that go with it.

The tragedy is that many women marry men who hold the mindset of boys who always go out to demonstrate or prove their manhood or sexual prowess. A man and a woman invest from scratch, build together and then when they both make it, the man’s true colours come out – disrespectful, selfish, insensitive, ufuska (promiscuity) and betrayals at every turn.

Suddenly the man acquires new playmates and new partners to spend money on. The justification is that all men cheat anyway so why should he forego the privilege! He thinks it, states it and practices it with a sense of entitlement.

“Sex is everywhere.  You are not a sex object”. Ebo!? What does this mean?

This statement arises from a patriarchal frame of reference. Underlying this statement is an assumption that sex should not be that important to you – you are a woman.  You should be ashamed for even thinking or demanding it. You are being censored for behaving like a slut. Good women don’t think or demand sex. This proclivity is the preserve of men. Only men have this insatiable appetite for sex.

And yet, sex is said to be an expression of love between men and women. It is one of the reasons why women leave their homes.  Marriage is not taken as consummated unless the deed is accomplished.

The message is contextual also in the sense that all women are not the same. Some women crave for sex more than others. Some are highly self-aware and self-confident and are looking for diverse things in their men. Nowadays, some women are rich and independent in their own right.

Their preference may not necessarily be money or investments but quality sex and companionship from the man of their choice with all that this entails. The issue of objectification may not be even remotely relevant in this case. I have not rested my case yet.

What did other feminists say on the picture and the accompanying caption?

EK: The statement is sexist, patriarchal and connotes male dominance on matters of economics and sexuality. Why would women want to manage grown-up men? This removes responsibility from men and seeks to burden women. Men need to man up. Women need sex too and it doesn’t need to be labelled. Women can invest without men and vice versa. Anyone can be in charge of their sex life – it doesn’t have to be dictated. Women are not servants with controlled and predictable libidos and sex lives.

J.M:  Well I don’t agree with what the statement propagates. God did not create our relationship with men for them to turn us into slaves. It takes two to tango. If both partners are into it, then each will go extra miles to make it work. It is my philosophy and that’s what keeps me going in my 13 years relationship so far. Yes, I agree we are smart, we always are…even in relationships, we are the smartest that’s why things turn out as they do…either we stay or we walk out. but being smart doesn’t mean we should subordinate ourselves. Yes, we should be visionaries but not a slave to it.

JJK: I am not a sex object, that’s for sure. Sex is everywhere, I agree. There is a lot to offer. Very true, when there is love and there are his availability and readiness. It’s not true that I should have a mentality of competition in love. This stresses women. By the way, it’s not women only that need to prove their fidelity, men too need to prove that.

ABK: I don’t know. But I think a woman is not a gatekeeper for men’s behaviour. Why would male adults be managed?

AB: I think there is some truth to it… however, relationships are not the same everywhere and with everyone

CJ: A relationship is made on mutual understanding. Our areas of expertise may vary and intellect varies on perceptions. I would rather be a woman who is comfortable with her flaws, a true friend, loyal and caring and just being real and one should accept me for it. Not all women have business acumen and not all men are businessmen, but we both need a person who will be there despite the hard falls one may experience.

What is your take on the matter?

Afya People and Events Politics
Author Ansbert NgurumoPosted on 17th March 20212nd June 2021 0 Comments
JOHN Pombe Magufuli, the President of Tanzania, has died of Corona. The announcement of his death was made by Vice President Samia Suluhu tonight...