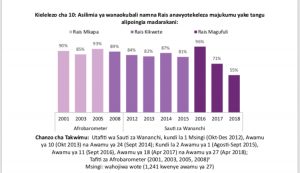 TANZANIA’s populist president and self-proclaimed “man of the people,” John Magufuli, is fast losing popularity. His presidential approval ratings have dropped to the lowest level in the country’s history.

The lowest points his predecessors scored were 81 percent (Jakaya Kikwete in 2015) and 93 percent (Benjamin Mkapa in 2005).

TWAWEZA – a Dar es Salaam-based organization – did research briefs titled: “Captains of their own ship? Citizens’ thoughts on participation and demonstrations and Speaking truth to power: Citizens’ views on politics in Tanzania,” basing on data from Sauti za Wananchi, Africa’s first nationally representative high-frequency mobile phone survey, collected from 1,241 respondents across the country in April 2018. In its report issued on July 5, 2018, TWAWEZA says:

Critics of the president have raised issues with his slumping popularity, saying a drop of 41 points in just two years is no small matter for a populist leader clamping down on opposition and critical media, and turning the governance of the country into a one-man show.

Magufuli has been launching minor projects on behalf of his subordinates and, on several grounds, he has been literally dishing out cash in public and buying fruits for passersby for political capital.

Banning live coverage of parliamentary sessions and political rallies since 2016 as a way of putting the opposition in political oblivion, he has been the only political practitioner solely enjoying live media broadcast in all of his events.

“Despite all this, he is still unpopular. He must be removed from office,” says Zitto Kabwe, a parliamentarian for Kigoma Urban and leader of ACT-Wazalendo. He also accuses Magufuli of outright nepotism.

Godbless Lema, a parliamentarian for Arusha Urban and shadow minister for home affairs, doubts the authenticity of the findings, noting that matters are worse than depicted.

Tundu Lissu, an outspoken lawmaker for Singida East, writing from his hospital bed in Belgium where he is undergoing treatment, expresses similar skepticism and caution. He is of an opinion that the level of credibility of these findings might be used to set a precedent for future poll results. Any person who trusts this report, may be automatically obliged to trust it in future with a hiked approval rate close to elections in 2019 or 2020, he warns.

“Across a range of indicators of democracy, the majority of citizens say there is less freedom now than there was three years ago.

“Citizens feel that freedom has diminished for opposition parties to hold rallies and speak their mind (64%), the media to criticize or report government mistakes (62%), and for independent groups to voice their views, hold meetings (58%).

“Half of citizens also feel they personally have less freedom to voice their own political views (54%). But support for multiparty democracy remains strong, with 9 out of 10 citizens (84%) preferring to have many political parties.”

The report insists: “More citizens (37%) now think opposition parties should criticize and monitor the government to hold it to account in-between elections than was the case in 2016 (20%), and more citizens think opposition parties should be allowed to hold meetings this year (64%) compared to 2016 (51%). In terms of the existing ban on opposition rallies and meetings, 5 out of 10 citizens oppose (48%) while 4 out of 10 support (40%) it.

“Citizens themselves say they are willing to take action to hold government to account including by joining together with others to raise an issue (97% are willing) and talk to the media (89% express willingness) but in the past year far few citizens actually did these things (44% acted together, 5% contacted the media). However, 7 out of 10 citizens (71%) did attend government meetings in the past year. Citizens see attendance at decision-making meetings as the best way they can be part of government (53%).”

Afya People and Events Politics
Author Ansbert NgurumoPosted on 17th March 20212nd June 2021 0 Comments
JOHN Pombe Magufuli, the President of Tanzania, has died of Corona. The announcement of his death was made by Vice President Samia Suluhu tonight...